Free Minority Certification Seminar at the Kissimmee Incubator on January 30, 2013 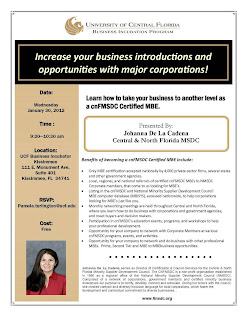 Posted by Florida Photonics Cluster at 1:33 PM No comments:

TALLAHASSEE, FL – The winners of the 2012 Governor’s Innovators in Business Awards were announced today by Governor Rick Scott. The winners will be honored this evening during a reception at the Governor's Mansion.

Governor Scott said, “I am proud to announce another group of award winners. My number one mission is to grow jobs for Florida families, and the successes these companies have experienced represent the job opportunities being created in Florida.”

Companies that have been denoted as the top job producers in the state of Florida will also be recognized at tonight’s event. These organizations represent various industries, including information technology, life sciences, agriculture and hospitality. The top job producers come from all regions of the state, including Miami, Panama City, Naples and Jacksonville.

* * *
The 2012 Governor's Innovators in Business Awards program is co-sponsored by Bank of America and Florida Trend magazine. For more information about the awards, please visit http://eflorida.com/govawards.

* * *
Enterprise Florida, Inc. (www.eflorida.com) is a partnership between Florida's business and government leaders and is the principal economic development organization for the state of Florida. Headquartered in Orlando, Enterprise Florida’s mission is to facilitate job growth for Florida’s businesses and citizens leading to a vibrant statewide economy. In pursuit of its mission, Enterprise Florida works closely with a statewide network of economic development partners and is funded both by the State of Florida and by private-sector businesses.
# # #

Posted by Florida Photonics Cluster at 10:43 PM No comments:

SPIE leaders have joined other science, engineering, and STEM education organizations in urging the President and Congress to develop a bipartisan solution to avoiding the fiscal cliff that supports crucial American investment in science and technology. Deep cuts in federal R&D investments would threaten national competitiveness, the organizations are saying in a letter to U.S. leaders.

BELLINGHAM, Washington, USA ― 9 December 2012 ―SPIE , the international society for optics and photonics, and other science, engineering, and education organizations are urging the President and Congress to find a balanced, bipartisan plan including tax and entitlement reform to avoid the fiscal cliff ― one that ensures strong support for economy-building science and technology enterprise.

Economic growth in the industrialized world since World War II has been driven by innovation and technological progress, the letter to Congressional leaders and President Obama<http://design.spie.org/xml/Documents/AboutSPIE/PDF/Intersociety-Sequestration-Letter_11-28-12.pdf> says. Besides spawning the Global Positioning System, the laser, and the Internet, technology has enabled countless medical advances that have helped save the lives of millions of heart disease, cancer and diabetes patients, among others. Almost every national priority - from health and defense, to agriculture and conservation - relies on science and engineering, the letter notes.

Federal R&D investments account for less than one-fifth of the current discretionary budget, but discretionary spending is the only place where deep cuts would be made if sequestration goes into effect, the letter observes:  "Placing a significant burden on these crucial areas is nothing less than a threat to national competitiveness."

The letter warns that several countries in Asia and Europe have increased their research intensities substantially and at a far faster pace than the United States, threatening the nation's long-term leadership position in science, technology and innovation. "Allowing blunt cuts to R&D to go forward will only accelerate these trends," the letter says.

Much is at stake, noted SPIE CEO Eugene Arthurs. "Our nation's leaders are wrestling with our dire financial problems and we applaud their efforts. While we recognize the constraints, it would be utterly foolish to damage the best hope for economic health: our science and technology capability."

Robert Lieberman, chair of the SPIE committee on Engineering Science and Technology Policy, emphasized the importance of federal funding for STEM education and R&D on competitiveness in technologies enabled by optics and photonics.

He cited findings of the recent National Academies report "Optics and Photonics, Essential Technologies for our Nation," on "the crucial role education plays in ensuring a vibrant future," and the trend of domestic workforce shrinkage in STEM fields.

"Today, the United States has many outstanding universities that educate students from around the world in the classroom and in research laboratories," the report notes. However, the number of U.S. nationals in graduate programs at top optics schools is as low as 40 percent. "If the United States continues to shrink its STEM workforce and market share in photonics, innovations in research will bolster the economy and the defense technology of countries poised to take advantage of those advances."

Sequestration would require up to $12 billion in R&D funding cuts annually across defense and nondefense programs over the next decade, the letter says.  Among the impacts:
*       DARPA (Defense Advanced Projects Research Agency) would lose over $1 billion for cutting-edge innovation.
*       The NIH (National Institutes of Health) would lose $11.3 billion for research on medical challenges including those related to cancer, obesity, aging, and emerging diseases.
*       The Department of Energy would lose $4.6 billion through 2017 for next-generation energy research and nonproliferation R&D.
*       The National Science Foundation would lose $2.1 billion over five years for research across a broad spectrum of disciplines, most of which is cutting-edge research conducted at universities throughout the nation.

SPIE<http://spie.org/> is the international society for optics and photonics, a not-for-profit organization founded in 1955 to advance light-based technologies. The Society serves nearly 225,000 constituents from approximately 150 countries, offering conferences, continuing education, books, journals, and a digital library in support of interdisciplinary information exchange, professional growth, and patent precedent. SPIE provided over $2.7 million in support of education and outreach programs in 2011.

Posted by Florida Photonics Cluster at 10:22 PM No comments: 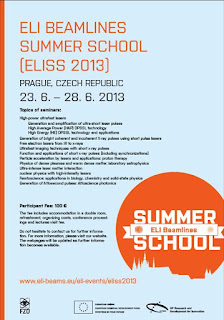 Posted by Florida Photonics Cluster at 10:05 AM No comments:

Mark your calendars... 2012 Support Our Troops Resource & Career fair! Orlando, FL Tuesday, December 4, 2012 ________________________________________ Over 250 companies have attended the Support Our Troops Resource and career fairs since April, 2012 to outreach and promote employment & educational opportunities to veterans, active duty and military spouses. _______________________________________________ _______________________________________________ All military career fairs are FREE to job seekers and open to the public!!! 2012 Support Our Troops Resource and Career Fair! Orlando, FL Date: Tuesday, December 4, 2012 Location: Holiday Inn - Orlando International Airport, 5750 T.G. Lee Boulevard, Orlando, FL 32822 Time: 10am - 1pm Employers: Click Here to register or call Oran Brown at 800-235-2732 x800 Space is Limited.. Confirmed Companies Include: New Horizons Modis Corporation Embry-Riddle Aeronautical Everest College - Online Degree Apple One Department of Homeland Security-US Citenship and Immigration Services Florida Atlantic University EEOC D&A Building Services Troy Univesity Wyo Tech Orlando VAMC Florida Christian College ITT Technical Institute Gem Global The Dave School Rollins College Allied Barton Security Palmer College of Chiropractic Aviation Institute of Maintenance Volt Workforce Solutions Connecticut Broadcasting School Everglades University International Academy of Design & Technology US Customs & Border Protection Chancellor University Air Orlando AM K9 Detection Services Careers USA FBI Everest University Devry University Atlantic Tower Services Orange County Sheriff's Department Orlando Vet Center H.T. Services AeroTek to name a few..! About the International Academy of Design and Technology. IADToffers creative-minded students an innovative curriculum that blends design and technology. We embrace their unique talentsto help them evolve into skilled professionals ready to pursue opportunities in a variety of creative and technical fields. In today's creative workplace, design and technology go hand in hand. To ensure that what we teach is industry relevant, our curriculum has been reviewed by an Employer Advisory Board, and our faculty includespracticing professionals as well as industry-savvy academics. We believe that when students have the opportunity to learn from people who know the ins and outs of their field, they're getting what they really need to help them be workplace ready. Collaboration is a big part of our teaching approach. Students can collaborate with other students—even those from different programs—the way it's done in professional environments. As their skills evolveand their work takes on a more professional edge,they can select their best pieces to build a portfolio to showcase their talentsto prospective employers and clients.They also have an opportunity to get published in our high-quality magazine that features selected outstanding student work. Our degree programs cover a range of fields: · Graphic Design (Associate and Bachelor's) · Information Technology (Associate and Bachelor's) · Retail Merchandise Management (Associate and Bachelor's) · Fashion Design & Merchandising (Bachelor's) · Digital Media Production (Bachelor's) · Internet Marketing (Bachelor's) · Web Design & Development (Associate and Bachelor's) Campus facilities include lecture rooms, computer labs, drafting labs and design studios, and sewing and pattern-drafting rooms. The school library offers publications and audiovisual materials that support our programs, plus students have access to an extensive online CECybrary which features an expansivecollection of reference materials. As students approach graduation, our dedicated Career Services department can assist with job search preparation and opportunities. Like our students, we have evolved over the years. Our programs are industry-current and we aim to be in step with the needs of the marketplace.Anyone who would like to find out what IADT is like can call 888-846-6111 for a complimentary Class Pass to sit in on a class of their choice. ________________________________________ Register today! 800-235-2732 x800 for more details. www.vetready.org Diversity Solutions Po Box 740948 San Diego California 92174 United States
Posted by Florida Photonics Cluster at 9:19 AM No comments:

Fast, New Way to Train Your Staff in Laser Safety with LIA’s New Laser Safety Awareness Course Online
ORLANDO, FL, November 28, 2012 — So you are a newly appointed laser safety officer (LSO) with a staff to train. Now you have decisions to make. Do I train my staff myself?  Should I have someone else train them? How do I coordinate their work schedules with training so everyone can make it?  Do I have to create a PowerPoint presentation? Well, the Laser Institute of America (LIA) has just the course for you.

LIA, the recognized leader in laser safety education and resources since 1968, has created a new online Laser Safety Awareness course tailor-made for the rapidly increasing nonmedical laser workforce. LSOs or “laser area personnel” can sign up from anywhere in the world to complete this highly focused training session in about two hours. And, since LIA is the secretariat of the ANSI Z136 laser safety standards, you know you are receiving proper training from the foremost experts in the field.  At the end of your training, you will receive a certificate via email acknowledging you completed the course.
The course will address basic laser physics, beam and non-beam hazards, laser system control measures and current standards and regulations. Based on the ANSI Z136.1, Safe Use of Lasers standard, this course will detail the all-important parameters that can cause bodily harm.
Not only is the Laser Safety Awareness course convenient, it is cost-effective; while the individual cost per trainee is $70, LIA is offering a bulk discount based on the number of “seats” an LSO purchases. An LSO supervising many laser personnel at multiple manufacturing sites will not only save time by not having to create a laser safety course, they can be even more efficient by giving all their staff the same expert course no matter where they work.
To register for LIA’s new Laser Safety Awareness course online, visit www.lia.org/education or call 1.800.34.LASER.
About LIA
Laser Institute of America (LIA) is the professional society for laser applications and safety serving the industrial, educational, medical, research and government communities throughout the world since 1968. www.lia.org, 13501 Ingenuity Drive, Ste 128, Orlando, FL 32826, +1.407.380.1553.
Posted by Jim Pearson at 5:53 PM No comments: