Abstract:
We describe the transmission anomalies that we observed numerically in the electromagnetic transmission coefficient of dielectric and metallic photonic crystal (PC) slabs or films and we present an asymptotic formula for the resonant enhancement. Central to calculating the transmission anomalies is the perturbation of three coincident zeros-those of the dispersion relation for slab modes, the reflection constant, and the transmission constant. On the spectral side, the eigenvalue which corresponds to a guided mode is perturbed off its imbedded position on the real axis and turns into a resonance. The theory applies to very general geometries of the unit cell.  In the particular case of extraordinary transmission (EOT) in a periodically perforated metallic PC films, we take into account the geometry and pinpoint the resonance with great precision near the frequency of the first Raleigh anomaly in a combined analytic/numerical approach.  Furthermore, we demonstrate that a thin transmission spike observed in simulations is not seen in experiments because of  imperfectly collimated incident beams.

Biography:
Stephanos Venakides is a Professor of Mathematics at Duke University. He received his Ph.D. from the Courant Institute of Mathematical Sciences in 1982, after graduating from the School of Electrical and Mechanical Engineering of the University of Athens (Greece) in 1969, subsequently working as an engineer in the industry for seven years and receiving an M.S degree in applied mathematics from Georgia Tech in 1979. In 1982, he joined the faculty of the Department of Mathematics at  Stanford University as assistant professor and moved to  Duke University in 1986, first as associate professor and since 1991 as professor. His research interests include partial differential equations and  integrable systems, linear and nonlinear optics and the analysis of coherent structures in optical systems,  electromagnetics in general, quantum physics and polaritons, as well as the investigation of the  forces of morphogenesis in biology. In 2005 he gave one of the three Abel lectures at the award of the Abel Prize to Peter D. Lax, by the Royal Academy of Norway in Oslo.

For more information:
Dr. Bahaa Saleh
Dean & Director, Professor of Optics
407-823-6834
Posted by Florida Photonics Cluster at 8:09 AM No comments: Links to this post

Strong-field dynamics has been shown to be sensitive to the carrier-envelop phase (CEP).  Experiments with CEP-stabilized pulses, however, have been limited to few-cycle pulses ( 2 or 3 cycles).  This is because the more cycles a pulse has, the less sensitive experiments are to variations of the CEP.  Recently, we introduced a new approach we call synthetic CEP stabilization.  Synthetic CEP stabilization is possible with pulses containing a pair of peaks, but the relative phase and temporal separation must be controllable independently.  As we will show, the first peak induces coherence in an incoherent, isolated quantum system allowing the second peak to interact with a coherent, isolated quantum system.  Even though neither peak is CEP stabilized – the phases of the peaks vary randomly from shot to shot – we are able to observe phase effects even with pulses as long as 50 fs (20+ cycles) because there is always a well-defined phase between the two peaks – synthetic CEP stabilization.  To demonstrate the power and utility of our approach, we have investigated strong-field optimal control of molecular dynamics.  Three distinct processes concomitant with strong-field enhanced ionization were studied as the CEP was varied:  (i) the propensity for large amplitude bending vibration of a nominally linear 3-atom system, (ii) the alteration of the explosion strength and (iii) the modification of the branching ratios into degenerate channels. We will present evidence suggesting the relative phase, which has garnered little attention in optimal control literature, plays a much more fundamental role in optimal control than previously thought.  Our results shed light on why closed-loop optimal control searches (e.g., genetic algorithms) lead to multiple solutions with nearly the same efficiency.  Specifics of our results and their ramification will be presented.
Posted by Florida Photonics Cluster at 12:00 PM No comments: Links to this post


ORLANDO, Fla., (Feb 8, 2012) --- The University of Central Florida Business Incubation Program and Kauffman FastTrac announced recently that they are offering 30 hours of training to U.S. military veterans interested in starting their own companies.
“In 2012, we proudly trained more than 300 men and women who selflessly served our country. It is our honor to train an additional 500 plus veterans in 2013 and help them prepare for the next steps in their careers,” said Alana Muller, president of Kauffman FastTrac.
The FastTrac curriculum is tailored specifically for veterans seeking to start a new business or expand an existing company.
The classroom-based course offered by the University of Central Florida Business Incubation Program and additional FastTrac® NewVenture™ instruction helps aspiring entrepreneurs determine the viability of their business concepts and enables them to engineer a plan to successfully launch their companies.
The course, a value of up to $700.00 per person, will be offered at a discount to veterans.
Courses will be scheduled throughout the year. Interested veterans can find more information by contacting Peggy Allen at 407-882-0888 or by email at peggy.allen@ucf.edu. 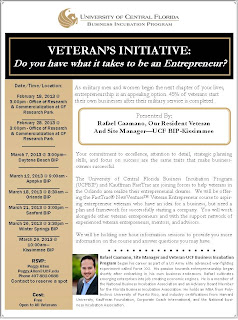 Posted by Florida Photonics Cluster at 12:58 PM No comments: Links to this post

Free Seminar: Selling to the Government by Tony Espinosa of the Small Business Development Center 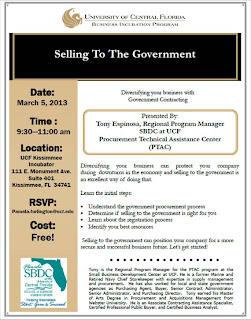 Posted by Florida Photonics Cluster at 1:53 AM No comments: Links to this post